skip to main | skip to sidebar

Welcome to the Blog Of CPSA DC210 San Jose

The opening reception for our chapter show, "Explorations in Colored Pencil IV" was held Friday, September 4, 5:30 - 8:30 PM at the Pacific Art League in Palo Alto.  Attendance was huge thanks to PAL's Anniversary Show reception at the same time!  Many more people were exposed to the versatility of colored pencil than we normally could have reached.

1st Place and $100: Sunshine at the Windowsill by Gemma Gylling, CPSA

Honorable Mention: The Lion and the Mouse by Marian Gault

Here are a few photos from the reception.  The show runs Sept. 4-24, so see it while you can! 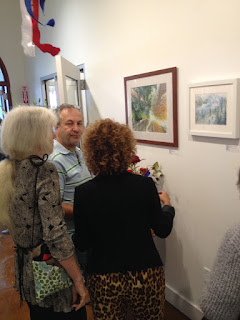 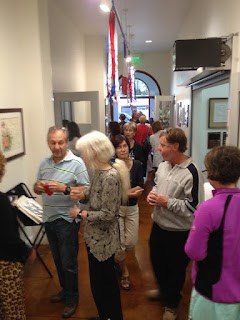 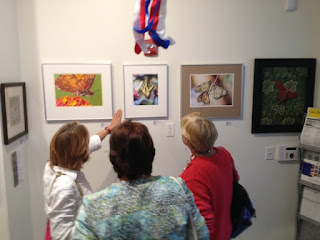 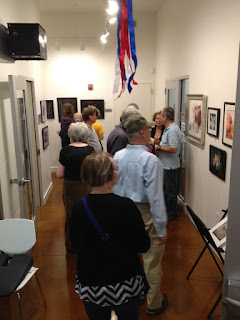 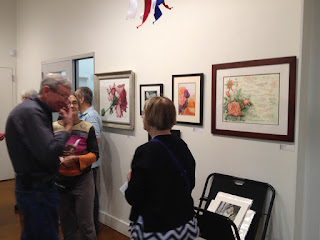 Congratulations to CPSA DC210 member Ranjini Venkatachari on winning an Award of Distinction for her piece Genealogy in the 23rd annual CPSA International Exhibition!

What a meeting we had on Saturday, August 22!  Our longest one ever, but so worthwhile.

We had two guests who drove all the way from near Pismo Beach to check us out. I think we made a good case for them to join our chapter rather than the Los Angeles chapter--either direction is a very long drive for them.

Maryann Kot summarized the plein air outing at Alden Lane Nursery in Livermore in July.  Five people attended and had a great time drawing, particularly since there was a special bonsai show going on.

We are still looking for a volunteer to redesign our chapter brochure.

Mike Purdy gave an update on our 20th anniversary celebration at Campo di Bocce on Sunday, October 18 at 12:30; we will meet there for lunch and bocce ball.

Maryann Kot gave an update on our booth plans for the Livermore ArtWalk Saturday, October 10, 11 AM - 5 PM.

Vivi Leon gave an update on Paws in the Park, September 27 in Pleasanton.  Our chapter will not be an official presence there, but several of our members along with some non-members will have a booth, selling pet-related artworks (originals, cards and prints) and donating some or all of their sales to the local animal shelter.

We passed around a get-well card to sign for outgoing membership chair Linda Huffman, and welcomed her appointed replacement Maryann Kot.  Maryann has jumped into the role with both feet!

Our next meeting will be Saturday, November 14 at the Bothwell; the presentation is TBD.

Officer elections are coming up in October!

Big news: our 2016 workshop presenter will be Ann Kullberg!  Yes, she of “Colored Pencil Portraits Step by Step” fame, and publisher of CP Magazine, “CP Treasures” volumes I, II and III and more upcoming books.  Mark your calendar for Saturday and Sunday April 16-17 at the Bothwell.  Ann will present her two-day portrait workshop.  Cost $235.  The minimum number of registrants we need is 14, the maximum is 24.  All registration will be handled through Ann’s website, not ours.

We talked about the idea of having a “drawing retreat” sometime next spring, and there seems to be a lot of interest in it as well as a couple of great suggestions on where we might have it, so we will start looking into this.  The idea of a “retreat” is to go somewhere away from the distractions of job, family, cell phones and commitments, and just enjoy focused drawing time with similarly-minded people.  This is an idea I heard about from some other chapter presidents at the convention this year, and they all said it’s one of their members’ favorite events!

Folks who tried out the Strathmore 400 Series Colored Pencil paper samples I provided at the last meeting reported back on what they thought of it.  Opinions seem to be mixed; a couple of folks liked it and its texture and weight just fine, while a a couple of other folks complained that it doesn’t seem to want to take more than 2-3 layers of pencil, is a little too thin and has a harsh texture.  What did you think?  It just goes to show that everyone’s preferences are different!

Six members of CPSA DC210 have submissions in CPSA national’s ArtSpectations online exhibit!  Paula Greer, Mary Young, Mike Purdy, Andrea Myers, Janki Chokshi, and Mike Menius.  Ranjini Venkatachari, who is the national exhibitions director, reports that there were more than 480 entries this year, including several international entries.  Judging is in progress and winners will be announced in September.  See the online show here:  https://cpsa.fluidreview.com/p/

Ranjini also reported that the prospectus for Explore This! 12 will go online September 15th. The juror is Holly Koons McCullogh, the director of Curator of Exhibitions, Greater Reston Arts Center.

Ranjini was not present because at the same time as our meeting she was giving a 90-minute demo at University Art in San Jose.  She told me a couple of days before that there were 35 people signed up for it and 20 more on the waiting list!  This is great news—it means folks are very hungry to learn more about our favorite medium.  Ranjini will be teaching a workshop at the store on Saturday, September 12; contact the store to sign up.  She is also having a solo show at the Lindsay Dirkx Brown Art Gallery in San Ramon September 1-29.

I will be teaching a half-day “Vibrant Realism with Colored Pencil” workshop at the Pacific Art League in Palo Alto, Sunday, Oct. 11 1-5 PM; see its listing here:  http://www.pacificartleague.org/workshops

Maryann Kot has a new drawing class starting in September at the Bothwell Arts Center in Livermore, “Basic Drawing: Focus on Nature”.  This is in addition to her “Basics and Beyond - Colored Pencil”.  For more information about both, see here:  http://www.livermoreperformingarts.org/bothwell-arts-center/camps-and-classes.html

Maryann Kot presented “Finishing Your Artwork” and provided a summary handout.  There was discussion about framing your work yourself vs. having a framer do it, and also about final fixatives (the consensus seems to be that Lascaux is the best and Krylon is to be avoided), and how to sign your work (discreetly).  Maryann also talked about the importance of UV protection for artwork and lightfastness, and showed her copy of the CPSA’s Lightfastness Workbook, which is available for free to all CPSA national members.  She showed an original drawing of hers which had changed dramatically due to sunlight exposure only a couple of hours per day but over a few months in a gallery due to the use of non-lightfast pencils.  She said she threw away about a third of all her pencils after referencing the Lightfastness Workbook.

There were quite a few “Show and Tell” pieces!  We have so many talented members!  Some of these pieces will be in our chapter show in Palo Alto next month, and others will be at Paws in the Park.

Earlier this year, former CPSA DC210 member Eleanor Perry passed away at age 88 and directed that all her art supplies be given to our chapter.  We offered a minute of silent gratitude for her generosity.  She was remembered from the late 1990s as a librarian who lived in Castro Valley with no close family, who did beautifully detailed colored pencil work.  Even her obituary mentions her CPSA membership:  http://www.legacy.com/obituaries/insidebayarea/obituary.aspx?n=eleanor-perry&pid=174466505  We decided earlier this summer that the best way to honor her wishes would be to have a silent auction of her supplies at our meeting—members would get some great bargains and the chapter would receive the money, win-win.  I think everyone who placed a bid went home with some kind of happy bargain!  We’re going to think of something worthy to do with the money in Eleanor’s honor.

The few items which received no bids—mostly older pads of paper and tubes of paint were donated to the local high school art program. All in all, we hope Eleanor Perry would be pleased with the disposition of all her art supplies.

This is our Chapter Blog/Newsletter! Remember this belongs to you the member, we can all add to the newsletter. You can send me your news to my email address on the roster and I will be happy to post it with pictures and all!